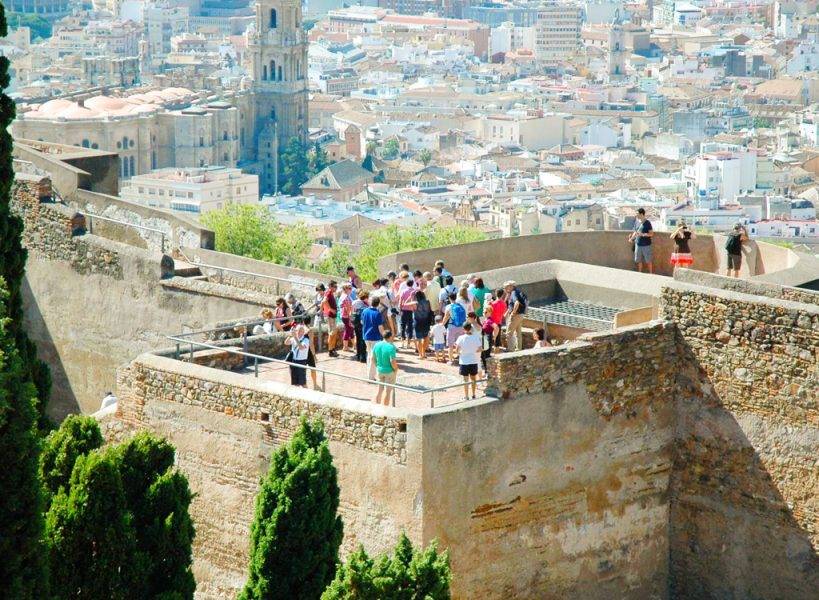 The magnificent Castillo de Gibralfaro sits on a high hill overlooking Málaga city and port. From here you can take breathtaking pictures and enjoy wonderful views over the city.

This Castle, built in the 14th. Century to house troops and protect the Alcazaba, is today one of the most visited monuments in Málaga. From its walls, visitors get spectacular views of the city and you can visit the Interpretation Centre to discover the site’s history.

It was named after a lighthouse at its peak (Jabal-Faruk, the light mountain). Although it was used by the Phoenicians and Romans, in 1340 the Nasrid King Yusuf I made the place into a fortress.

During the reconquest (i.e. the Reconquista) it was besieged by the Catholic Monarchs in the summer of 1487 and Ferdinand the Catholic made it his temporary residence after the victory. In addition, he designated the castle as a symbol on the coat of arms of the city.

It was considered the most impregnable fortress on the Iberian peninsula for a time. It has two lines of walls and eight towers. The outer wall meets the coracha, zigzagging walls arranged to link to the Alcazaba Castle. Inside you can walk around the whole perimeter of the fortress.

There are three ways to reach the entrance of the castle. One is from the Alcazaba: walk up Paseo de Don Juan Temboury from near the Alcazaba entrance. This follows the fortress’s outer wall and joins a cobbled path, which traces the hill’s contours and passes through the pine trees on the Coracha. Take a bottle of water, as there is no kiosk until the top.

Another way is to climb the zig-zag steps which lead up from the Plaza del General Torrijos at the east end of the Alhameda Gardens to join the same cobbled path. The third way is to take a taxi or the Tourist Bus which use the road around the back of the hill.There were plans to build a funicular railway up the hill to the Castillo.One suggestion, to enjoy the views and have a walk, but without too much strenuous uphill climbing, is to take a bus or taxi up to the castle, and walk back down.